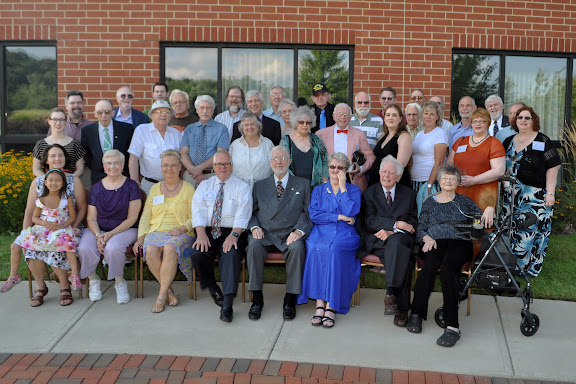 The major delight at any year's convention is reconnecting with fellow members in our group--and also forging new friendships. The names we read in the bundle now have faces, and the personalities we have noted in journals are enhanced as we interact personally. So it was truly a pleasure for those who attended to meet with members whom they had "known" for some time via correspondence. For me, this began as soon as I entered the Marriott Courtyard Hotel in Dayton, Ohio.

The interaction continued Thursday evening at the Hibachi Grill and Supreme Buffet in nearby Kettering. Members of the National Amateur Press Association (NAPA) joined with us, and 26 of us honored the tradition begun in the early 1980s by longtime AAPA stalwart Charlie Bush. Back at the hotel, with appetites satisfied, there was a welcome in the third floor Hospitality Suite with chatting, tales of members we have known in past years, reviewing photos of past conventions, and looking over journals. 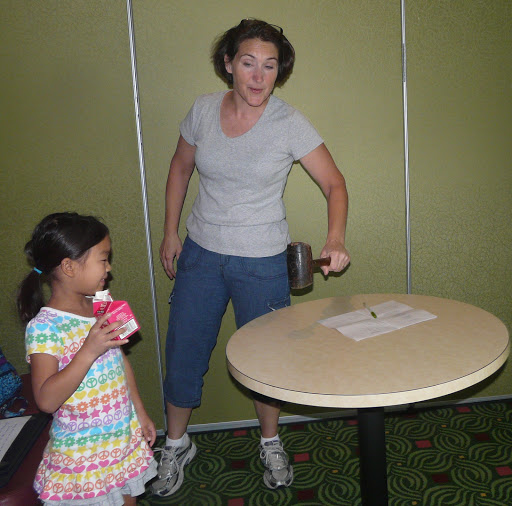 The convention proper started for the AAPA at 8:30 Friday morning in the Flyers Room. After introductory remarks by president Susan Petrone, each person in attendance had a chance to offer an introduction, including whatever information he or she wanted to give. In keeping with the AAPA By-Laws, which state that "the convention may transact no official business," the reports given were only informational. Susan began by thanking each one for sharing their weekend with the group. She also thanked the AAPA for entrusting the group to her leadership in last year's election. Her first goal, she stated--somewhat "tongue in cheek"--was to keep from damaging the association. But further, she would like to increase activity and the fun we can have together as a group, participating in our hobby, amateur journalism. She would like to increase online participation among members who do not own printing equipment, those who are no longer able to or interested in operating printing equipment, and those who just like to use computers to have fun in amateur journalism, whether or not they have access to printing. After Susan's remarks, secretary-treasurer Ivan Snyder, the only other officer present, gave a brief report concerning membership statistics and our financial status.

The subject of possibilities for next year's convention was brought up. Susan is open to receiving bids from members willing to host the 2013 event. So think about it!

After a short break, both AAPA and NAPA members gathered in the convention room for a very interesting demonstration of an easy method of bookbinding, led by Columbus, Ohio member Bob Tauber, Book Arts Specialist at the Ohio State University Libraries' Center for Book Arts & Logan Elm Press. Bob was capably assisted by Jim Patterson, also of Columbus. Each one present was given materials for a book: paper components cut to size, and binding thread; needles, wax, scissors, and bone folders were also provided for the hands-on demonstration. Bob showed each step of the folding, sewing, and assembly; so that at the end of the session, each one had a small bound booklet. 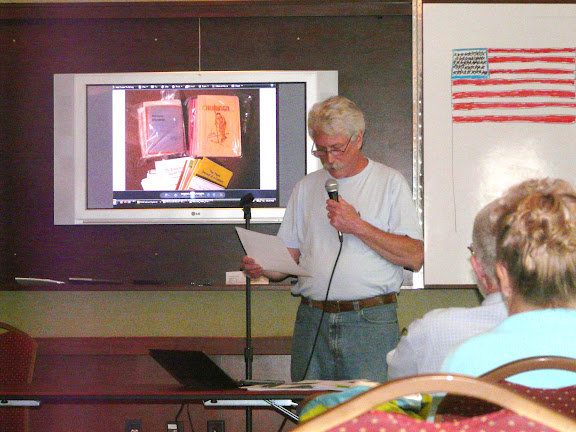 Friday afternoon's joint session began with a report from Tom Parson regarding the status of the Graham-Wesson collection. There is quite a history of how The Fossils came to be in possession of that collection; the late Stan Oliner, of Denver, Colorado had received it, and had begun to analyze the extent of the collection. It included the Wessons' massive collection of amateur journals--both bound and loose; the four boxes of 3x5 index cards from the late Victor Moitoret, and his father Tony Moitoret before him; the collection of Lone Scouts journals; and Oliner's own collection. Upon Oliner's death, Tom Parson offered to continue organizing the collection, since he also lives in Denver. There are quite a few unresolved issues Tom is having to figure out with what little information he has. Tom has inherited an enormous task, and is hard at work cataloguing everything in such a way that information will be available by journal, publisher, organization (NAPA, AAPA, UAPAA, etc.), by city and state where published, etc. If members have questions regarding specific journals, Tom is willing to try to find answers; questions may be addressed to librarian@amateurpress.org. Please understand that the work of organization is just beginning, and it may be some time before some information is available.

Tom's report was an appropriate lead-in to the next subject of discussion: how AAPA and NAPA can coöperate in the promotion of amateur journalism. Tom's ongoing work in cataloguing the vast collection, supported by AAPA, NAPA, and The Fossils, is an outstanding example of intergroup coöperation. NAPA president Alice Brosey led the group discussion. Some of the ideas brought up included the integration of online blogs as part of ajay endeavors, since blogs are the present-day manifestation of the amateur journals published--often by young people--during the 20th century. The fact was raised that one advantage of publishing a blog online is that it eliminates the need to turn out 200 or 300 copies of a journal, which can be a formidable task on a hand press. This led to mention that some publishers in the past have used limited mailings; they privately mailed their journals to other members whose journals they had received, thus not having to produce a lot of copies to members who are not evidencing much interest in the hobby; but then hope was expressed that the work involved in privately mailing journals might lead to the conclusion that maybe the bundles are the easiest way, after all. Another point brought up was the possibility that writing, printing, and publishing could tend to be a lone effort. Instead of a lot of lone publishers sending something for the bundle, this should be a community of likeminded individuals together pursuing a common hobby. Communication with those whose efforts appear in the bundle, and attending conventions or local gatherings, could foster a spirit of togetherness and stimulate a deeper interest in participating.

No final conclusion was reached, and the assembly was dismissed amid thanks to Tom Parson for the work he is doing with the Graham-Wesson collection. 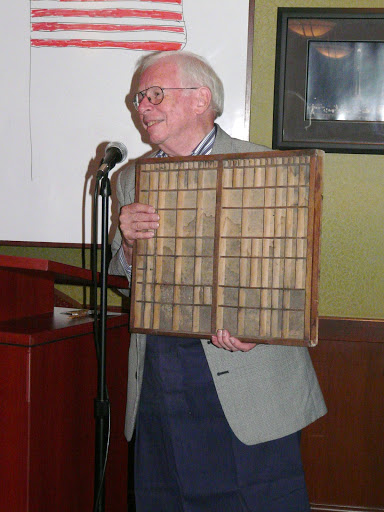 The auction was scheduled for 7:00 to 10:00 p.m.; actual start and end times were a few minutes after what was scheduled. Auctioneer George Hamilton went through several tables full of items that had been donated. Member Stan Pekala had printed bags stating that "I bought all this wonderful stuff at the AAPA/NAPA Auction Friday, July 27, 2012 - Dayton, O.," and each bid winner was given a bag (or bags) in which to carry off the loot. Some items generated vigorous competition among bidders; however a great number of journals were purchased at super-bargain prices, partly because the volume of them precluded extracting what they should be worth. Also on the auction block were books, type cases, and cuts.

Following the auction, a number of members retreated to the hospitality suite. There, West Virginia member Mark McComas was sketching caricatures of anyone who wanted one, for a donation to be split between AAPA and NAPA.

The first activity for Saturday was the visit to the National Museum of the U. S. Air Force. This museum is housed in a vast facility, and numerous airplanes were on exhibit. Those who were on the tour of the museum lunched there, after which the combined members of the AAPA and NAPA assembled in the meeting room to view a demonstration of the LetterMPress app for iPads and Macs. John Bonadies (the owner of Bonadies Creative, Inc.), Molly Poganski, and Jeff Adams (who happens to be the cousin of our president, Susan Petrone) gave this amazing presentation. LetterMPress is a "virtual letterpress" app. Fonts of wood type are displayed on the top of the screen of an iPad, from which the user can select the type face preferred. It looks totally authentic, with actual photos of the type itself. Having selected the type face, the user can "drag" the individual letters down to the bed of a Vandercook cylinder press--again, an actual photo of a Vandercook. After assembling the type on the bed (and hearing the same clicks and clacks you would hear while setting the type up on a real press bed), you can select the paper you want, then the ink--even mixing inks, if you so desire. When all is ready, you give the cylinder a little shove (actually a little swipe on the screen of the iPad), and watch the cylinder go rolling over the paper, pressing it against the inked type. And the finished broadside comes flying up to your view! Connect with a printer and you can even print your broadside!

Members of the two groups began assembling in the hotel lobby at 5:30 p.m. for the social hour, followed by a group photo shortly after 6:00. After the photo, the door into the meeting room (which had been transformed into the banquet room) was open, and members filed in and began sitting at the tables. After a tasty meal, George Hamilton, a member of AAPA's Laureate Committee, announced the 2012 Laureate Awards, then Michelle Klosterman and Alice Brosey presented the Laureate Awards for NAPA.

The speaker for the banquet was Alex Heckman, the Director of Education and Museum Operations at Dayton History at Carillon Park. Heckman's speech took in aspects of Dayton's history, the Wright Brothers' printing endeavors, and their subsequent flight achievements.

Read more details of the 2012 AAPA Convention in posts to the AAPA Information blog, and view photos in the 2012 convention photo album.